We’re now over at chemtrailsnz.wordpress.com

This one has been spreading like wildfire around the chemtrail community. Finally! The smoking gun!

Problem is, of course, is that what they’re seeing is perfectly normal aerodynamic contrails caused by the plane moving through what is obviously very humid air. You can see the same effect on many other videos, and here’s a whole gallery of beautiful stills of the effect from Flickr user Steve Morris Aviation.

WorldTruthTV.tv [sic] has a fairly typical response, with these particular gems of wisdom…

First, the trails are NOT coming from the back of the jet engines.

Wouldn’t this fly in the face of the fact that virtually all identified ‘chemtrail’ planes show the trails coming from the engines?

Second, the trails are not merely water trailing off the edges of the wings because as the plane passes, in addition to the wing trail emissions, there are clearly SPRAYS coming out of several sections at the rear of the wings in clear addition to any water that may be washing off the wing during landing.

Which is just a simple misunderstanding of how wake vortices work (which is understandable, it’s a complicated process, which is way outfits like NASA spend a lot of effort on researching it). But, again, it’s a well-known, and well-documented effect.

What’s even better about the WorldTruthTV.tv [sic] article is that the image they’ve lifted to illustrate the article was taken by the aforementioned Steve Morris, and is used all around the internet in order to explain the effects of wake vortices.

So, not just wrong, but deliberately deceptive.

That’s ‘chemtrail’ research for you, I suppose.

In response to this video of ‘dispersing chemtrails’ (‘cirrocumulus‘ to the rest of us) over at Clare‘s, moonman Ken Ring makes the following statement.

It is NOT drifting. It is the earth rotating under it. Do you really expect it to move with the earth? The fact that it does not proves it is very high cloud.

To which all one can really say is … wow.

Hahahahaha! This blog was always destined to FAIL! No posts or comments in over a year. Maybe the annoying little boy that started this blog actually grew up?! They all do eventually and figure out how immature & futile their pursuit of “professional argumentativeness” actually is. Ce la vie. Yet another in a long line of silly hobby “debunking” sites bites the dust while actual truth moves on as ever… gone AND forgotten!

So sayest the fantastically named ‘NutbarsnzRtheRealNutbars’ in a typically considered, thoughtful comment from the conspiracy theorist side of the fence. (And I’d be impressed if the email address they commented with really was ‘nutbarsnzyousuckbigones@andyouhaveatinypenis.com’.)

Anyway, as NutbarsnzRtheRealNutbars has pointed out, this site has been put on indefinite hiatus. As the site byline states, I’ve been banging my head against various conspiracy theories for a few years now, and you can only point out other people’s mistakes for so long before realising they’re never going to (or will never want to) learn. The chemtrail hoax is pretty well dealt with by other sites (notably Metabunk and Contrail Science) for anyone who’s at all confused about the science behind contrails (and the non-science behind ‘chemtrails’).

And smashdracs! I’d’ve put you at the top if you’d just asked!

Oh and on another related sidenote that some here may find amusing… before I stated adding any comments in these forums I did a little back-reading and followed a few links. One that I visited only a few times was this rather silly little debunking blog called nutbarsnz. I laughed raucously at the massive amount of spamming they were receiving from one commenter in particular before the blog pretty much dried up (and blew away) just over a year ago. Cut a long story short…

Oh, come on Karmakazi Angel!? Surely you’re not accusing our favourite commenter – Biblical Prophet – of being a ‘spammer’? He just made, um, ‘interesting’ points. Unlike, say, MysteriousNZ, Clare Swinney or The Contrail, I’m not in the habit of deleting comments or banning people whose views disagree with my own.

Now, this recent post by Travellerev about my ‘trolling’ was presumably kicked off by a comment left by ‘Rua’ on this post: Medical Journal Article: 14,000 U.S. Deaths Tied to Fukushima Reactor Disaster Fallout.

The research linked to claims that…

An estimated 14,000 excess deaths in the United States are linked to the radioactive fallout from the disaster at the Fukushima nuclear reactors in Japan, according to a major new article in the December 2011 edition of the International Journal of Health Services.

Wow. That’s a lot. How did they come to this conclusion? Well, they fudged the numbers is what they did, as explained here (and here, here, here, here, to name but a few of the sites that have taken the time to look at the actual numbers).

Basically, the researchers ignored the data that didn’t prove their hypothesis, honing in instead on a subset of the data that did. Interestingly enough, the researchers involved have subsequently admitted to their ‘errors’ in their data interpretation (and made more in trying to keep their hypothesis alive, but that’s another story), but Travellerev…?

Well, obviously, my comment that pointed this out has now been deleted by Travellerev, which makes you wonder, does she still believe in the conclusion of that report, if even the original authors have admitted it’s erroneous? How does deleting any opinions that point out potential flaws in the research help in our quest for ‘truth’?

Travellrev, over at Aotearoa: a wider perspective, has had enough! Not for the first time, though, she’s made a few, presumably inadvertent, errors in her post. Since I’m banned from commenting over there, I thought I’d just post a corrected version here… END_OF_DOCUMENT_TOKEN_TO_BE_REPLACED

In the US Fema camps are being brought online and contractors are sought to be on standby to be at these camps in 72 hours to welcome the first of the millions of dispossessed Americans arrive for a smooth elimination after President Obama signs S 1876 allowing the military to arrest and round up Americans whom they deem dangerous.

All of this was predicted by smarter people than me but I was able to see this coming from a mile six years ago thanks to these smart people. I hope A reads this and sometime in the future he might even have to admit I was right all along even though being right was one of my greatest fears.

…writes Travellerev, lamenting her (ex?) friend’s lack of faith in her predictive abilities (emphasis mine).

So, there ya go. Within the week, we’ll be seeing the first of millions of  Americans rounded up and placed into the aforementioned FEMA camps.

I, like Travellerev, certainly hope that when this happens ‘A’, whoever he might be, will admit his mistake!

Of course, if it doesn’t happen, do the people who predicted it need to acknowledge their mistake?

UPDATE: Naturally, in the mind of Travellerev, this isn’t actually a hard and fast prediction (despite the words I’ve quoted verbatim from her site), and now states that the intake of ‘prisoners’…

…could be tomorrow or in the next thee years or whatever.

Or ‘whatever’. Such prescience!

…that somewhere in the world, in the next 10 days, it’ll be really really windy somewhere.

Hopefully this will put me in the same category of soothsayer as the much-respected WEATHERONUT (respected by Clare, at any rate), who predicts a 7.0+ earthquake somewhere on the Planet Earth (as opposed to some other planet) in the next 10 days.

It’s been a month since the last big ‘un (that 7.1 in Turkey), so, from statistical point of view, we’re already 15 days overdue for another one. Of course, earthquakes don’t concern themselves with maintaining statistical averages — there weren’t any quakes of this magnitude in February or May, for example — but, given the frequency with which quakes of that size have been occurring in recent times, is Weatheronut’s prediction really that big a call?

Another interesting post over at Clare’s notes an unusual ‘grid pattern’ to earthquakes taking place near the Canary Islands and in Eastern Turkey recently.

“Surely this is unnatural” states Clare. And, yes, it certainly looks a bit odd. What could it be? Surely such a clean, delineated pattern must be the result of human interference?!

Well, to a degree, it is. The European-Mediterranean Seismological Centre website, from which the images of the grid-like pattern are taken, are rounding the longitude/latitude co-ordinates of every single recorded earthquake to 2 decimal points. As such, any swarm of quakes in the same area will appear to be evenly spaced from each other as the rounding effect pushes each quake onto the grid created from that mechanism.

The ‘gridding’ effect only becomes apparent when there’s a lot of earthquakes very close together, which allows for a zoom level high enough to allow it to become apparent, but, rest assured, every single earthquake on the EMSC gmap will appear on the intersection points of that grid. It’s impossible for them to not appear on those points!

Looking at it right now, you can see exactly the same effect is still taking place in the Canary Islands and Turkey. Here’s the snapshot of (at the time of writing) recent Canary Islands quakes, with the long/lat grid overlaid to illustrate what’s happening. (Edit: yes, I mislabelled the first longitude point – it shoud be 18.03W)…

Here’s another one, Turkey this time…

Now, as explained above, you need a pretty large number of quakes in a very small area for the grid to become obvious (you need to be able zoom in close enough for it to really jump out at you), and the only places where that kind of swarm is occurring at the moment is in the Canary Islands, and in Turkey, which have both already been fingered as ‘unnatural’. How about a series of four quakes in the North Atlantic, far from anywhere, and surely off the NWO’s radar? Are they on the grid…? 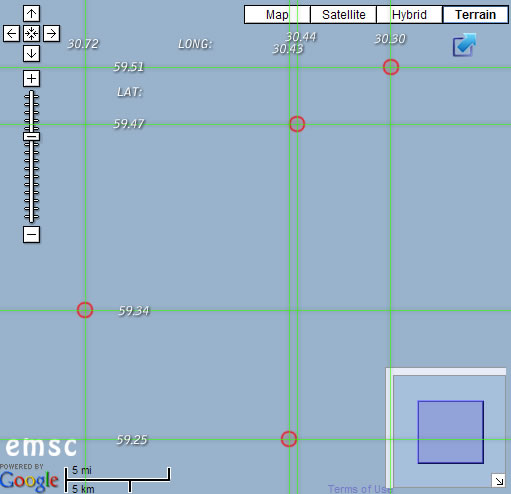 Of course they are.

Given the way the EMSC is plotting them, they have to be.

(Note: I’ve only drawn on the relevant long/lat grid lines here, as it was going to get too cluttered otherwise. This is a good example of how you need a decent cluster of quakes for the effect to show up in any obvious way. At this zoom level, the pattern is still there, but not so apparent.)

Seems Clare and the crew over at the Con Trail have discovered cloud-seeding!

How does cloud-seeding marry up with popular chemtrail theory?

So cloud-seeding doesn’t look like ‘chemtrails’, doesn’t contain any of the chemicals that you’d expect to find in ‘chemtrails’, and pre-date the ‘chemtrail’ era by fifty years.

And on that last point, the guys over at Metabunk have even discovered that this specific cloud-seeding operation has been in existence since 1948.

To think, all that work the NWO has been doing on keeping chemtrails a secret, and then someone goes and puts an ad about it in the local paper!